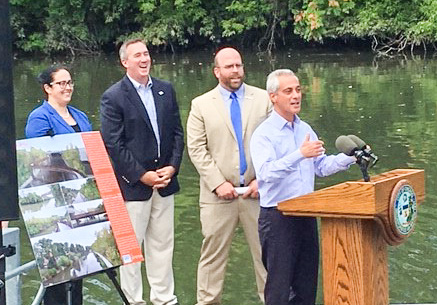 Two years in the making, “Our Great Rivers” is the city’s first unifying and forward-looking vision and action agenda for Chicago’s three rivers—the Calumet River, the Chicago River and the Des Plaines River. The plan, released on August 17, 2016 and available at www.greatriverschicago.org, calls for Chicago’s rivers to be more inviting, productive and living places by 2040. A product of a partnership between the Metropolitan Planning Council and Friends of the Chicago River, both of which are Driehaus grantees, the plan is based on feedback gathered from thousands of Chicagoland residents who participated in more than 120 community events over the past year.

Funding for “Our Great Rivers” was provided by ArcelorMittal, Boeing, The Chicago Community Trust, The Richard H. Driehaus Foundation, The Gaylord and Dorothy Donnelley Foundation, and The Joyce Foundation.

Building off the vision of “Our Great Rivers,” the Active Transportation Alliance (another Driehaus grantee) has begun to convene a group of stakeholders to create an advocacy strategy for a continuous Chicago River Trail and plans to publish a report in the fall.