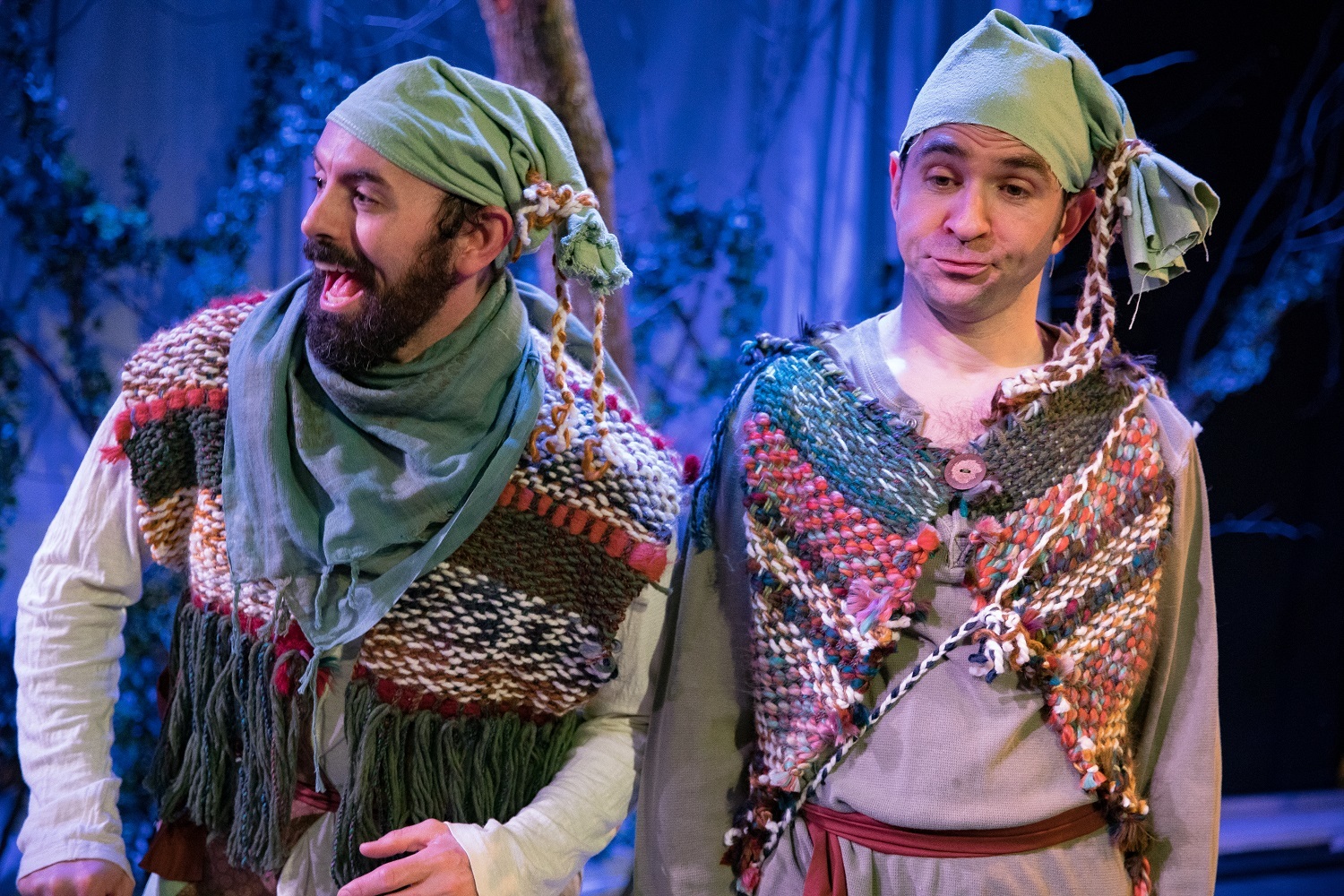 We are pleased to announce grants totaling $710,000 over three years to 50 Chicago arts and culture organizations. These grants are made in partnership with The John D. and Catherine T. MacArthur Foundation through the MacArthur Funds for Arts and Culture at The Richard H. Driehaus Foundation. This MacArthur Funds grant cycle, the first of two this year, supports organizations with annual operating budgets under $150,000 that serve Chicago audiences.

Congratulations to these MacArthur-Driehaus awardees!

This artist&dash;centered platform and dynamic venue for socially-progressive thinking challenges “what art is, whom it’s for, and where and how it’s created.” Highlights of its upcoming programs include the multi-faceted Justice Hotel and a remount of Living Architecture at the Chicago Cultural Center.

Artemisia - A Chicago Theatre produces new feminist plays that empower women.  It provides women artists with opportunities to build their careers.  Artemisia's season includes a fall festival of staged readings of 3-4 new plays and a full production of a play selected from past festivals.

Association for the Advancement of Creative Musicians

AACM is an acclaimed, African American-led group of musicians and composers. Its 2019 work includes an ongoing concert series at Stony Island Arts Bank and Logan Center for the Arts featuring the Great Black Music Ensemble, concerts in the parks, and a Pitchfork Music Festival appearance.

Bach Week Festival is a four-concert series that takes place in the spring each year.  Its mission is to expose the widest possible audience to the choral, orchestral, chamber, and solo works of J.S. Bach, at the highest quality, in an accessible way and at an affordable price.

beyond this point is a percussion-based ensemble that works in cross-disciplinary, collaborative art and social practice.  Programs synthesize musical performance with disciplines including theater, dance, media/film, visual art, installation, environmentalism, and social justice.

BoHo produces musicals and plays that unite artist and audience in the examination of truth, beauty, freedom and love. Its 2019 season includes the musicals Bright Star and Big Fish, and the recent Broadway and West End ghost story The River.

Broken Nose Theatre develops and presents new work that seeks to cultivate empathy, spark conversation, and amplify underrepresented voices. This season includes the company-developed Plainclothes, the Midwest premieres of Girl in the Red Corner and Language Rooms, and the 7th annual Bechdel Fest.

The Chicago Chamber Choir, now in its 23rd season, uses music to affect positive change in the world. The choir's repertoire draws from choral music throughout history and around the world, with a special interest in how contemporary choral music speaks to modern singers and audiences.

The Chicago Composers Orchestra is dedicated to the performance and advocacy of orchestral music by living composers. Now entering its 10th anniversary season, CCO will be commissioning more than 20 new works, half of them from Chicago composers, over the next two years.

Chicago Folks Operetta presents music from Viennese and American operettas from the early 20th century. It will perform Abrahám’s The Flower of Hawaii and Lehár's Peter and Paul in the Land of Nod, and two multimedia concerts of composers who were silenced by the Third Reich.

Chicago Fringe Opera presents innovative vocal and operatic works with an emphasis on new and contemporary styles and intimate performance experiences. Its mission is to make opera accessible through repertoire written in English and to utilize exclusively Chicago talent, both on and off stage.

Chicago International Movies and Music Festival (CIMMFest) creates events to celebrate music of all genres through movies, live performance, and innovative combinations of the two.  Its upcoming plans include a large-scale public "micro-festival" and the first Chicago Music Tech Summit.

The Chicago Repertory Ballet’s mission is to bring storytelling and choreographic innovation to the stage while inspiring audiences and challenging preconceived notions of the art form. Each spring it presents a ballet focusing on narrative storytelling or abstract dance.

Since 199, Clinard Dance has sought to keep flamenco music and dance contemporary, relevant, and vibrant through cross-disciplinary and cross-cultural collaborations. Alongside the ongoing “Flamenco Quartet Project,” the company is developing a new work that brings Pilsen’s past into its present.

Collaborative Arts Institute of Chicago is dedicated to the study and performance of art song. It presents a Collaborative Works Festival and four Lieder Lounges each year, all featuring leading vocal artists and pianists in intimate venues.

The Community Film Workshop of Chicago

Dance in the Parks NFP

Dance in the Parks’ mission is to bring free, professional dance performances to new audiences in the most accessible venues in Chicago – neighborhood parks. These public venues create opportunities for youth and adults unfamiliar with dance to connect with local performers and choreographers.

Eclipse Theater produces a full season each year centered on the work of one playwright. The 2019 season features three plays by American satirist Christopher Durang.

Edgar Miller Legacy is dedicated to preserving and promoting the artistic legacy and spirit of the late Chicago artist, designer, and craftsman Edgar Miller. The Glasner Studio is one notable handcrafted private residency he worked on, in Chicago's north side.

Every House Has A Door

Every House has a Door, formed in 2008, convenes diverse, inter-generational project-specific teams of specialists, including emerging as well as internationally recognized artists to create interdisciplinary performances.

Gerber Hart Library and Archives is a circulating library and research archives focusing on Chicago's and the Midwest's role in LGBT history. As a cultural center, Gerber Hart brings its collection to the public through displays, lectures, and workshops, as well as performances, video, and film.

Founded in 1997, Heaven Gallery is a multi-disciplinary arts space in Wicker Park that presents emerging artists and musicians. The gallery promotes an open proposal process. Programs are open to the public and include art openings, artist talks, and community events.

Hot Crowd is a contemporary dance company which seeks to attract new audiences to dance, and to represent Chicago dance through touring. Upcoming projects will bring various neighborhoods into the creative process for two portraits in dance of Chicago, one a live performance and the other a film.

HotHouse fosters the international exchange of ideas within the context of progressive social change praxis. 2019 plans include cultural exchanges with Cuba, an exhibit at the University of Virginia, numerous jazz and world music performances, and several other film and recording projects.

Idle Muse Theatre Company explores the relationship between individuals and the worlds they inhabit. Guided by the values "Transporting. Timely. True.," the self-described modern guild of players presents two productions each year, the Athena Festival and a Sherlock Holmes-inspired radio play.

Khecari is a Chicago-based contemporary dance company that strives to fully sustain the creative process of its artistic directors and collaborating artists. It presents original works of dance savored for power, idiosyncrasy, and resonance.

KV 265 heightens the appreciation and understanding of arts and science through multimedia concerts. KV 265’s artistic presentations of astronomical and other scientific phenomena are presented live with leading musicians.

MS/MS, celebrating its 25th anniversary this year, is a Chicago-based company that supports dancer, choreographer, and educator Molly Shanahan’s movement and performance research and the public presentation of her work. MS/MS plans two local productions of its work in 2019.

NAJWA is devoted to the performance, production, and preservation of dance styles and techniques reflective of the African American dance heritage and experience. It offers classes, workshops, and demonstrations, and participates in Chicago’s Night Out in the Parks performance series.

National Cambodian Heritage Museum & Killing Fields Memorial is dedicated to Cambodian genocide awareness and social justice, advocacy for the voices of the genocide survivors and their families, the arts as a means for healing, and fostering leadership with its community.

The Paper Machete Group is a free-of-charge live magazine series that utilizes Chicago’s best comics, writers and performance artists to engage its audience in humorous, provocative conversations about current affairs and cultural issues.

Pivot Arts produces and presents contemporary and multidisciplinary performances on the far north side of Chicago. Pivot develops new works and presents finished work at its 10-day long multi-arts festival.

The Poetry Forum/RHINO is a volunteer organization that publishes an annual journal of poetry, flash fiction, and translations. It supports the local poetry community by hosting monthly Poetry Forum workshops, and RHINO Reads!, a monthly poetry reading series at Bookends & Beginnings in Evanston.

Marking its tenth anniversary season in 2019–20, RE | Dance Group makes emotionally driven, contemporary dance-theater works. Two premieres in January 2019 will be followed up by another new work on a shared program, in new venue the Filament Theatre, in November 2019.

Redtwist Theatre’s mission is to produce ‘white hot drama in a tiny black box with a little red twist.’ Founded in 1994, this theater company presents its performances in the Bryn Mawr Historic District in the Edgewater neighborhood.

Same Planet Performance Project is a modern dance organization that presents original work, most created by its artistic director. In February 2020, it will present a new work at the Dance Center of Columbia College.  The work will explore the meaning of "consent."

The Seldoms make intelligent, visually rich dance theater. It draws on contemporary issues, the history of art and ideas, and personal experience in its pursuit of a bold, exacting physicality. The highlight of its coming season is Floe, a multimedia piece about global warming and resilience.

Silent Theatre Company presents work that uses silence and aspires to create aesthetically awake moments through performance, music, and art. In addition to three editions of The Wild Party Variety Hour, celebrating its 10th year, in the fall it will present Nell Voss’ Incomplete Conversation.

Soft Cage Films produces short and long documentary and fictional films on social justice topics. It is currently working on a musical about the Homan Square Blacksite and a fictional film that adapts the Robin Hood story to the problems facing Chicago's working-class families.

SCDT is a multicultural organization that aims to preserve the art of dance through performances and education. While firmly rooted on the city’s south side and embodying south side-influenced movement, music, literature, and history, SCDT performs throughout Chicago and beyond.

The Space Movement Project is a women-led contemporary dance organization that creates its own new work in collaboration, while facilitating national touring for individual artists and small companies around the U.S. through the GRUNT Network.

Tango 21 Dance Theater is a new and unique presence in Chicago as an ensemble that tells original stories using tango music and dance interspersed with dramatic scenes. Upcoming shows include the premiere of its fifth production, “Radio Tango,” with an original score by two bandoneón luminaries.

Trap Door Theatre seeks out challenging and obscure works and performs them in a distinctive, European-influenced performance style. This 25th anniversary season includes work by Pirandello, Rozewicz and Mrozek, as well as 25/25 Fest, a showcase of 25 scenes from its history in Bucktown.

TUTA continually searches for the unique and exceptional in the language of theater, be it verbal, physical, or visual, in order to express ideas and expose questions vital to contemporary American society. Upcoming productions include Hedda: Sound & Space, a new adaptation of Ibsen’s Hedda Gabler.

For more than 20 years, Winifred Haun and Dancers has been a consistent mainstay of the Chicago-area contemporary and modern dance scene, devoted primarily to new sworks and cultivating local choreographers. Upcoming projects include national touring, site-specific presentations, and original music.