Classical and Modern: The Power of Architectural Vocabulary on Behavior 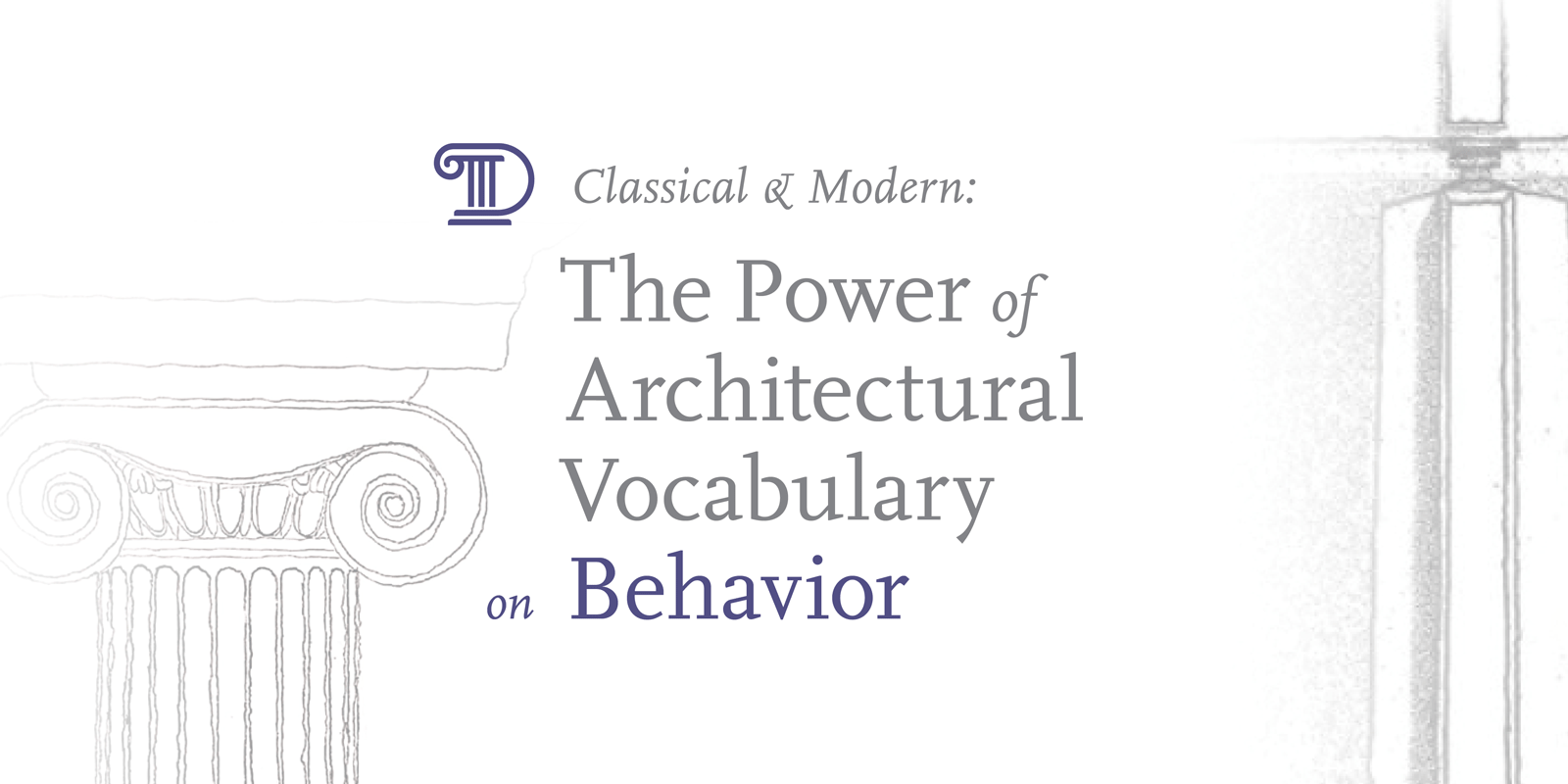 Stuart Cohen is a practicing architect, educator, and author. He is a fellow of the American Institute of Architects and is professor of architecture emeritus at the University of Illinois, Chicago. Cohen is the author of three books on the history of Chicago architecture. His most recent book is on the houses of Howard Van Doren Shaw.  A monograph on the residential architectural work of his firm, Transforming the Traditional: The Work of Cohen & Hacker Architects, was published in 2009. Cohen received a 2018 Arthur Ross Award from the Institute of Classical Architecture and Art for his contributions to architectural history and theory. He is a 2019 recipient of the Society of Architectural Historians award for Design, Academics and Scholarship. His firm, Cohen & Hacker Architects LLC, specializes in the remodeling and restoration of historic houses as well as new construction. The firm’s work has appeared frequently in “shelter” magazines and on HGTV.

Kevin Harrington is Professor Emeritus of Architectural History at the Illinois Institute of Technology in Chicago. He has also been a visiting professor at the University of Illinois Chicago, the Brandenburg Technological University in Germany, the University of Texas Austin, and the Escola da Cidade in Sao Paulo, Brazil. Born in Rochester, NY, he majored in history at Colgate University (BA) and studied the History of Architecture & Urban Development at Cornell University (MA, PhD). Between college and graduate school he served as an officer in the United States Air Force. His publications include Changing ideas on architecture in the Encyclopedie, 1750-1776, Mies van der Rohe: architect as educator, Chicago’s famous buildings, and Lake Point Tower: a design history. His research focuses on Chicago's architectural and urban development in relation to modern architecture and the modern city, especially considering the ways Chicago is typical or unique.

Aric Lasher is President and Director of Design at HBRA Architects in Chicago, where his projects have included buildings for government, cultural, academic and public institutions, residential projects, landscapes, renovations and restorations of historic structures. In addition to his work in architecture, he has designed sets for numerous films including Minority Report, Pearl Harbor and What Dreams May Come. Mr. Lasher is a Fellow of the American Institute of Architects and serves on the boards of the Mies van der Rohe Society and the Society of Architectural Historians.

Frederick Marks, AIA, LEED AP BD+C, is currently a Visiting Scholar and Research Collaborator at the Salk Institute for Biological Studies in La Jolla, California.  Mr. Marks has been a licensed architect for over twenty-five years and has a planning and design specialty in healthcare and laboratory science facilities.  He holds degrees in architecture and business administration with a major in real estate and urban land economics.  Mr. Marks is a founding board member and President of the Academy of Neuroscience for Architecture in San Diego, California.  He is a previous national AIA Knowledge Committee member, a current advisor to the national AIA Research Summits, and President of his local AIA chapter.  Mr. Marks currently is an advisor to the National Institute of Building Sciences, to the Delos WELL Living Laboratory, to the national ASHRAE Standing Guideline Project Committee, and the Johns Hopkins University Mind/Brain Institute.

Patricia S. Normand, MD, is an Associate Professor in the Departments of Psychiatry and Preventive Medicine, at Rush University Medical Center and is the Director of Wellness and Integrative Health, RUMC Road Home: The Center for Veterans and Their Families and the Director of the Mindfulness Based Stress Reduction program at RUMC. After completing residency and a fellowship in psychiatry at Massachusetts General Hospital, she remained on faculty at Harvard Medical School and on staff at MGH in the Psychiatric Outpatient Consultation-Liaison Program. She consults on wellness and burnout prevention, as well as mindfulness and integrative health programs in a variety of settings.

Cynthia Vranas Olsen is a licensed architect, interior designer and educator who has extensive training in classical ballet, piano and Greek culture. Her studies included course work in London with the University of Notre Dame and in Paris with Illinois Institute of Technology while completing her Masters of Architecture. Vranas taught Interior Design at Harrington College of Design and was appointed Associate Dean. She has worked as an architect at Murphy/Jahn and became a principal in Olsen | Vranas Design and Build where she continues to practice. Vranas completed her PhD at IIT, in Architecture with an emphasis on History and Theory. Olsen | Vranas’ professional work has been published and received numerous awards including a Landmark Award for Preservation Excellence - New Construction from the City of Chicago Office of the Mayor. Currently, Vranas holds the position of the Director of the Mies van der Rohe Society, an IIT based organization devoted to preserving the legacy of Mies – his pedagogy, buildings and campus at IIT.

Ullica Segerstrale is Professor of Sociology at Illinois Institute of Technology. With advanced degrees in both science and social science, she feels naturally drawn to the intersection between the two cultures, addressing such things as values, emotions, and communication in science and architecture in her teaching and research. Among her current interests are environments that inspire creativity. Segerstrale has given over 150 academic presentations and has published over 100 articles and 4 books. Her research has been supported by the John Simon Guggenheim Foundation, the American Philosophical Society, and the Rockefeller and Sloan Foundations, among others. She has received a number of awards, most recently the 2017 Illinois Tech Board of Trustees Award for Outstanding Undergraduate Teaching.