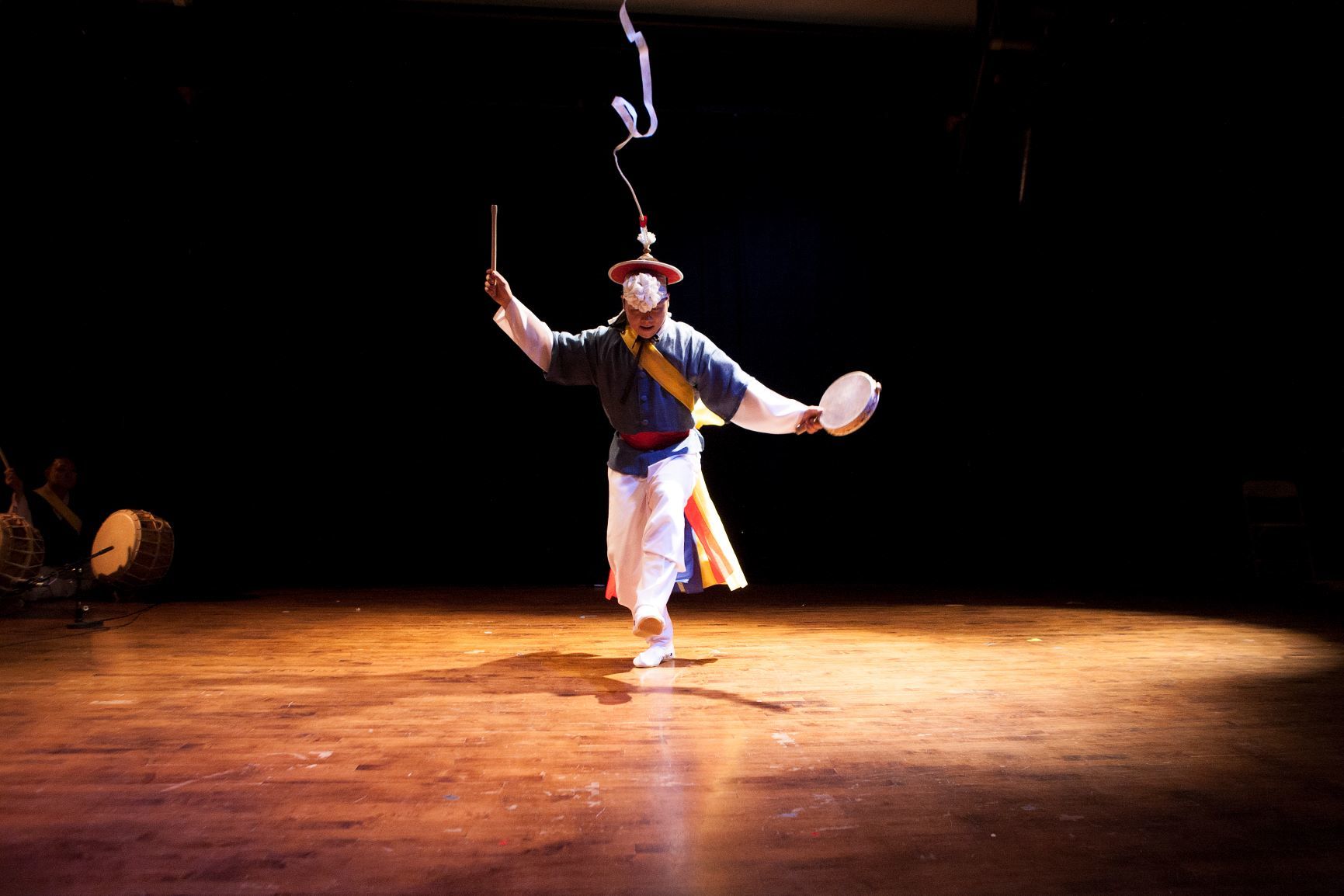 We are pleased to announce grants totaling $1,735,000 over three years to 64 Chicago arts and culture organizations. These grants are made in partnership with The John D. and Catherine T. MacArthur Foundation through the MacArthur Funds for Arts and Culture at The Richard H. Driehaus Foundation. The May 2018 MacArthur-Driehaus grant cycle supports organizations with annual operating budgets of $150,000 to $500,000 that serve Chicago audiences. Grantees represent a broad range of artistic disciplines, from music, theater, and dance companies, to museums, visual and media arts groups, and more. Grantees’ genres and aesthetics are also far reaching, from traditional African dance to women-centered theater to contemporary classical music.

Congratulations to grantees in the January 2018 MacArthur-Driehaus grant cycle!

16th Street Theater presents theater that encourages discussion and debate through timely and thought-provoking work. Season Eleven’s theme is heroes and features: The Wolf at the End, The Hero’s Wife, Koalas, Small Jokes About Monsters, Vacationing in the Moral High Ground, and His Shadow.

A Red Orchid Theatre produces contemporary plays and revives works from the past with modern relevance to build new audiences for live theatre. The 2018-19 season includes “Small Mouth Sounds” by Bess Wohl, “Fulfillment Center” by Abe Koogler, and “The Killing Game” by Eugene Ionesco.

Alongside community leaders and residents, archi-treasures develops public art such as murals, mosaics, and sculptures in under-resourced communities that strengthen social connections and generate pride. This year’s projects are in South Chicago, Grand Boulevard, Douglas, Uptown, and West Pullman.

The Artistic Home Theater is one of Chicago's leading dynamic theater companies, with dynamic acting ensembles and theater instruction. 2018-19 productions include Tom Stoppard's Rock 'n' Roll and Rod Serling's Requirem for a Heavyweight.

ACRE is an artist-run organization that supports a diverse, interdisciplinary array of early career artists. It does so by providing a two-week summer residency in rural Wisconsin for 80 artists then career development assistance, most notably the opportunity to present their work in Chicago.

Asian Improv aRts Midwest nurtures and produces traditional and contemporary Asian American cultural art forms that accurately reflect the multi-cultural, multi-ethnic reality of Chicago and the US. Highlights this year include Taiko Legacy/Reduction and the Chicago Asian American Jazz Festival.

Barrel of Monkeys teaches creative writing to students aged 7-13 in Chicago Public School and after-school programs. The actor/teachers adapt student written stories into sketches and songs, which are performed for the schools and later for the public in That's Weird, Grandma! on Monday evenings.

Chicago a cappella is devoted to furthering the art of singing together without instruments. The ensemble presents an annual series of concert programs, creates live broadcasts and studio recordings, tours nationally and internationally, and conducts educational outreach programming.

Chicago Dance Crash is recognized by its combination of contemporary and hip-hop techniques. This season includes the 10th anniversary of the “Keeper of The Floor” improv show and will close with an evening-length work by Muslim-American hip-hop choreographer Amirah Sackett.

Chicago Film Archives is the only regional film archive dedicated to identifying, collecting, preserving and providing access to films that represent the Midwest. CFA offers an array of public programs and participates in collaborations worldwide.

CHIRP is a volunteer-driven, online and broadcast community radio station featuring music, arts, and culture. It is live and local every day of the year. CHIRP’s focus is Chicago and plays a wide mix of local, independent, lesser-heard, and good music from a variety of genres and eras.

DanceWorks Chicago is described as "a laboratory from which early career dancers launch themselves." Many alums go on to perform for well-known dance companies locally and nationally. Season 12 includes performances in Germany, St. Louis, and at the Ruth Page Center for Dance in Chicago.

Evanston History Center collects, preserves and interprets the history of the Evanston through exhibits, educational programs and research facilities. Upcoming exhibitions focus on the year 1968 and Prohibition. Six Under the Buffalo lectures this season present books about Chicago history.

Fifth House Ensemble taps the collaborative spirit of chamber music to create engaging performances and forge partnerships with artists of other disciplines. Season highlights include an opera exploring the last hour of Orson Welles’ life and a collaboration with Tuvan throat singing ensemble Alash.

Filament creates immersive and site-specific theatre in which young people can practice their social, emotional, and imaginative skills. Upcoming productions at its Portage Park theater include remounts of its popular shows The Snow Queen and FORTS, and two world-premiere adaptations.

Full Spectrum Features is committed to increasing diversity in the media arts by producing, exhibiting, and supporting the work of women, LGBTQ, and minority filmmakers. Two films in production will preserve and interpret the history of Japanese-American internment during WWII.

The Gift Theatre's mission is to tell great stories onstage with honesty and simplicity. Located in Jefferson Park, the ensemble began producing in 2001. They will finish the 2018 season with Cosmologies, by David Rabe, Gift’s new ensemble member.

The Global Girls Theatre Collaborative creates and stages original theatre that "unpacks, challenges and heals." GGTC's focus is to uncover and showcase first-person narratives that reflect the realities of African American communities.

Global Pungmul Institute expands the creative domain of traditional Korean drumming, dancing, and singing. It also fosters collaboration between pungmul artists and those from other Asian genres and Western artistic disciplines. This year GPI will perform in over 60 engagements for 18,000 people.

Green Star Movement inspires students and community members through the creation of public art. Their chosen medium is bricolage, a style of mosaic. This interactive process transforms people and revitalizes neighborhoods. This year GSM will work in neighborhoods on the south and west sides.

Now in its 30th year, the Griffin Theatre Company produces literary adaptations, original work and classic plays that challenge and inspire, with wit, style and compassion for the audience. Upcoming productions in 2018-19 include the musical Once and a touring production of Innovation Nation.

Haymarket Opera Company (HOC) performs 17th- and 18th-century operas, oratorios, and chamber music. HOC uses period instruments in the orchestra and historically inspired staging conventions. In 2018, HOC will stage "L'Orentea" in June and "Serse" in August both at the Studebaker Theater.

The Hyde Park Jazz Festival is a free, annual two-day lineup of local talent and national and international artists. The 2018 Festival will feature emerging local artists in conjunction with the City of Chicago Department of Cultural Affairs and Special Events’ “Year of Creative Youth.”

Kuumba Lynx is committed to the lives of youth, using urban art and performance to reimagine a more just world. Upcoming events include the 4th annual Chicago Hip Hop Theater Festival, collaborations with MPAACT, and an appearance at the City of Chicago’s Year of the Artist kick-off event.

Lakeside Singers bridges the worlds of classical and contemporary choral music with a twenty-five singer ensemble that draws from both disciplines. This December’s concert features "Silent Night," "All I Want for Christmas is You," and world premieres of two pieces commissioned by the ensemble.

Media Burn Archive preserves, digitizes, and distributes a collection of culturally, historically and artistically significant, independently-produced video. Media Burn will digitize and disseminate original videotapes from the 2004 documentary “Howard Zinn: You Can’t Be Neutral On A Moving Train.”

The Miracle Center nurtures the development of the next generation of professional artists through rehearsal, performance, exhibition, and meeting space. In 2018-19, the Adult Theater Ensemble will debut “There's A Coqui In My Shoe!,” “In The Heights,” and “Chicago’s Puerto Rican Story.”

Mitchell Museum of the American Indian

The Mitchell Museum promotes and shares a deeper understanding and respect of Native American peoples though the collection, preservation and interpretation of their traditional and contemporary art and material culture. The exhibit “Heritage Markers” explores Native history in the Chicago area.

Once mainly a custodian of 19th and 20th century dance masterworks, MOMENTA has in recent years taken up the helm of physically integrated dance, providing training and performance opportunities for people with a broad range of ability and mobility. Its affiliated Academy serves as a pipeline.

MPAACT exists to develop, nurture, and sustain Afrikan Centered Theatre, grounded in the many cultures and traditions of the Afrikan continent and its Diaspora. In 2018, the company celebrates its 27th year and hosts a week-long festival called "Summer Jams" at the Greenhouse Theater Center.

Muntu Dance Theatre preserves and perpetuates the African aesthetic and its influence on world cultures through the education and professional presentation of dance, music, and folklore. Its next concert will celebrate the Great Migration and pay tribute to legendary artist/activist Oscar Brown, Jr.

Najwa Dance Corps is devoted to the performance, production, and preservation of dance styles and techniques reflective of the African American dance heritage and experience. Najwa offers classes, workshops, and demonstrations, and participates in the  Night Out in the Parks performance series.

The National Veterans Art Museum (NVAM) inspires greater understanding of the impact of war through the collection, preservation and exhibition of art inspired by combat and created by veterans. NVAM has a collection of over 2,500 artworks, presents special exhibitions and hosts public programs.

The Neo-Futurists are a collective of writer/director/performers who create new theatre that is non-illusory, interactive, direct, and unreproducible. Their best-known work is The Infinite Wrench, the late night offering when they attempt to perform 30 plays in 60 minutes, now in its 30th year.

Now in its 44th season, Oak Park Festival Theater produces classical Shakespeare and American plays outdoors, breathing new life into timeless texts from a 21st-century perspective. Upcoming productions include A Dickens Carol, Elizabeth Rex, and Much Ado About Nothing.

Pleasant Home manages this National Historic Landmark by architect George W. Maher, preserving the home as a museum and providing educational, recreational and cultural resources. Programming includes Silent Movies on the Porch and Preservation in Person, which combines home tours and lectures.

Red Clay creates and performs a diverse repertoire of Afro-contemporary dance that fuses traditional West African movement with contemporary dance forms. A cultural exchange with a Ugandan dance company will culminate in a performance in November 2018.

Rivendell Theatre Ensemble is “committed to advancing women’s lives through the power of theatre.” Rivendell stages a three-play season each year in its intimate performance venue in the Edgewater neighborhood.

The mission of Segundo Ruiz Belvis Cultural Center is to “preserve and promote appreciation of the culture and arts of Puerto Rico, with a special emphasis on its African heritage, while creating an inclusive and welcoming environment for collaborations with all cultural groups in the city.”

Founded in 1991, Shattered Globe is an ensemble theatre that creates visceral experiences that challenge perspectives through passionate storytelling. Next season's productions include a stage adaptation of Crime and Punishment, Will Eno's The Realistic Joneses, and Kate Fodor’s Hannah and Martin.

Sideshow Theatre presents plays that mine the collective unconscious with limitless curiosity and develops new works with The Freshness Initiative. The 2018-19 season includes HeLa by J. Nicole Brooks, The Ridiculous Darkness adapted by Wolfram Lotz and Something Clean by Selina Fillinger

Based in the Edgewater neighborhood, Steep Theater is committed to producing new and under-produced plays that tell stories of ordinary people in extraordinary situations. The 2018-19 season will include “Red Rex” by Ike Holter and “Pomona” directed by Robin Witt.

Tango 21 Dance Theater is the performing arm of Tango 21 Chicago, a west side center providing instruction in tango and other dance techniques. The ensemble produces original, evening-length shows with characters and narratives, with three in its repertoire since 2014 and a fourth in development.

Teatro Vista: Theater with a View

Founded in 1990, Teatro Vista is committed to sharing and celebrating the riches of Latino culture with Chicago audiences. The 20-19 season will include “The Abuelas” about Argentina’s “Dirty War” during the 1970s.

Named as one of Dance Magazine's "25 to Watch," Visceral Dance Chicago's accomplishments were acknowledged as "breath[ing] life into the Chicago [dance] community" (Chicago Stage Standard). In the Fall, VDC will perform at the Auditorium Theatre as part of its "Made in Chicago" series.